LWV US Position on Redistricting

Congressional districts and government legislative bodies should be apportioned substantially on population. We oppose partisan and racial gerrymandering that strips rights away from voters.

The second session of the Good Governance Series explores the impact of redistricting on our democratic process and looks at best practices that keep our maps from being gerrymandered. The League of Women Voters Charleston has posted the session from Monday, March 22, 2021, on their Facebook page. Check it out and then take action!

Every 10 years, voting districts are redrawn following the census.  Although the goal of redistricting is to maintain fair representation as populations change and move, the process can lead to gerrymandering.  Gerrymandering is the dividing of a state, county, etc., into election districts so as to give one political party a majority in many districts while concentrating the voting strength of the other party into as few districts as possible.  This practice is common regardless of the party in power unless legislation establishes a non-partisan process.
The League of Women Voters, both locally and statewide, is focused on encouraging legislation that will increase the fairness of voting districts in South Carolina following the upcoming 2020 census.
Gerrymandering:
In drawing voting district lines, districts can be manipulated to favor the party responsible for the lines.  The primary approaches are called packing and cracking: The infographic below from Virginia Public Access Project illustrates different approaches to drawing district lines and their outcomes.  Compact and fair districts are our goal since they represent voters best! 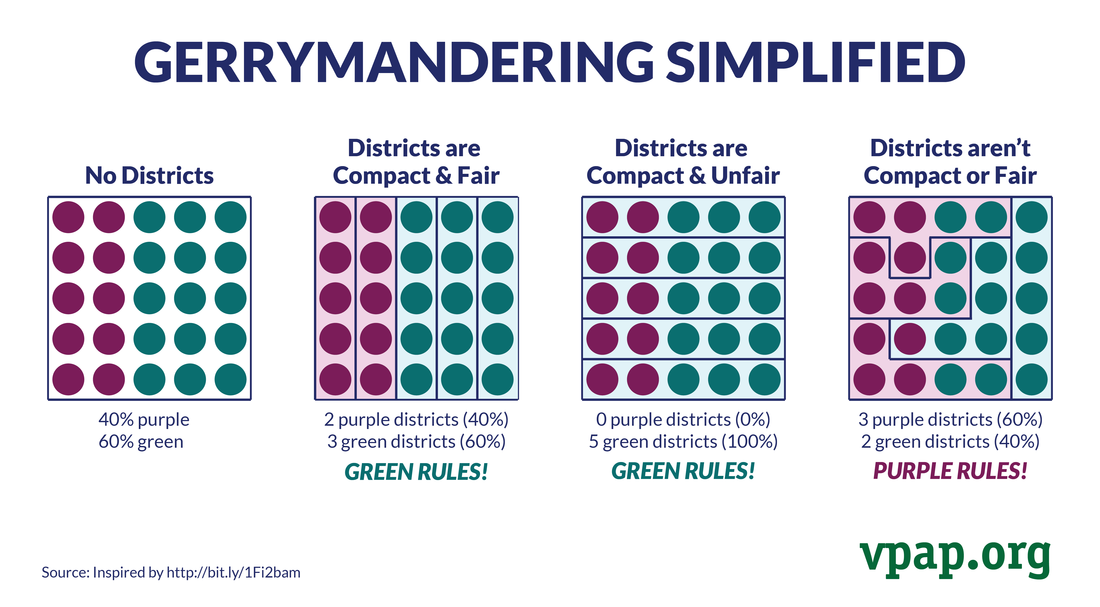 LWV US Position on Redistricting

Congressional districts and government legislative bodies should be apportioned substantially on population. We oppose partisan and racial gerrymandering that strips rights away from voters.

Why it matters:
Political and racial gerrymandering distorts and undermines representative democracy by allowing officials to select their voters rather than voters to elect their officials. When done for purposes of racial discrimination or to ensure the dominance of one political party, gerrymandering runs counter to equal voting rights for all eligible voters.

What we're doing:
We promote transparent and accountable redistricting processes and to end hyper-partisan practices that don't benefit constituents. We believe responsibility for fair redistricting should be vested in an independent special commission, with membership that reflects the diversity of the unit of government. The League works in states across the country to pass ballot initiatives to institute independent redistricting commissions.